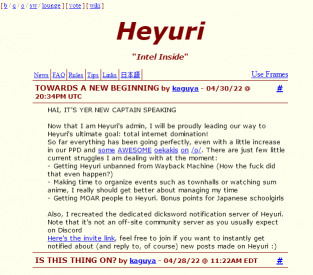 Heyuri.net is an imageboard created by lolico in 2018. It was originally hosted on the Heyuri.cf domain and meant to be a P2P filesharing website, but on November 24th 2019 it was relaunched in it's current form as an imageboard. May 25th marks "Heyuri Day", as it was the day when lolico finished his new software rollout, and Heyuri in its traditional sense truly began.

Heyuri has 3 main goals, to be a true "futaba clone", to encourage the creation of original content, and to provide a taste of older imageboard culture. As one user put it:

While our old site did have an undeniable "old internet" sentiment to it, and a userbase that bathed in nostalgia like a junkie bathes in opioids, it wasn't trying to emulate old 4chan specifically, as many assumed (and continue to assume) at first glance - at least, not beyond the fact it was an English-language Futaba-clone with an emphasis on anime and internet humor, as well as a couple of old 4chan-derived features that we liked (OK, maybe it was a little old-4chan inspired...)

While kuz once said:

We are NOT a oldfag circlejerk, of the same 5-10 recycled jokes from 15-x years ago. [..] In our eyes it is better to create something yourself that everyone can laugh at that than rehash a joke that you know for sure might get a kick out of a few.

Despite being a relatively small website, heyuri has an extremely complex, interesting, and layered culture. Due to rules which have cultivated a very small, tight knit community, the site is full of inside jokes and original content. See: Heyuri Culture

As far as the records show, on December 26th, 2018, lolico registered heyuri.cf. Today, the site has been reverted back to what it looked like immediate after lolico created it, but the domain itself has been through a long history of seizures, back and forth ownership and redirects. Lolico originally created the site as a way to sharpen his PHP skills and play around with programming, something he was very new to at the time.

Very little to no interesting things happen during this period.

On 11 November, 2019, Heyuri enters a new phase of life. Spurred on by lolico's need to expand his PHP knowledge further he launches Heyuri as an imageboard, using his imageboard software; sakomoto. The imageboard itself is terribly slow just like other altchans during its time. It also does not have anything resembling modern heyuri, such as Rule 8, Tomo, or board culture.

Heyuri in its beginnings, as a filehosting service.

Fast forward to February 5th, and Kuz now visits Heyuri. It's during one of these visits that he makes heyuris first and largest Tomo thread. It is around this time that lolico announces that he is looking for a 2nd administrator. 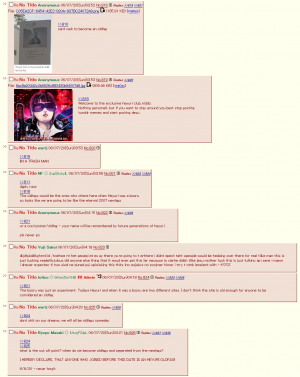 kuz and lolico run the site as two, and the site increasingly garners attention. Kuz's following on 9chan tags along with him to Heyuri, and this leads to an influx of users, also known as the party /b/us. Namefags and posters alike begin posting on the site, and the PPH reaches well above 100 every day. Tons of OC is made, plans for a huge flash is made, and the overall feeling of the site is positive and optimistic. What could be the worst that could happen?

Kuz and Lolico start to argue like two clucking hens.

Arguments between Kuz and Lolico on Discord are posted to 9chan or maybe it was 3chan.

Akima is defeated by Perl.