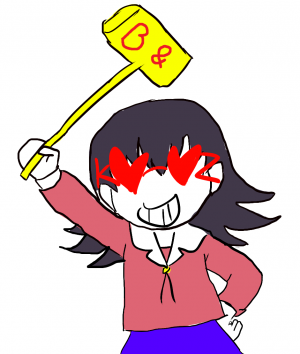 kuz, also known as k♡♡z, real name Yuri Kuznetsov[1] is a former administrator of Heyuri, and a long time contributor to the site. Joining the site in early 2020, he became the co-admin in May, and by June migrated Heyuri to his own servers.[2][3] Kuz is known for his unpredictable and eccentric behavior, something he is/was loved for on Heyuri. He created Rule 8[4] as well as several other important parts of Heyuri, he led the development of "Kokonotsuba", and revived Gurochan[5] and Vidlii[6] in 2021 and 2022. Kuz also runs the Kolyma Network[7], a controversial[8] webhosting company in Russia.

On April 25th, 2022, he stepped down as admin and gave his position to Kaguya[9], saying he had "less time" and "less motivation" but still believed Heyuri had huge potential and was his "favorite website",[9] but a later blogpost reveals that his reason for departure may be more complex.[10] 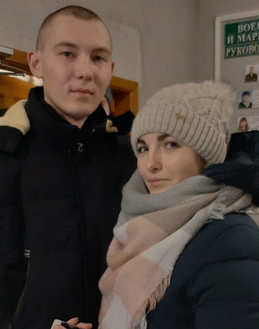 A picture of Kuz and his Wife, Nedelya Kuznetsova, which he posted to the 'party.

Kuz, born 1988, Omsk, USSR[11], currently lives in Eastern United States after exiling himself from Russia in 2014 over a dispute related to taxes.[12] He first married at the age of 16, though his first wife died 3 years into their marriage[13][14], he apparently remarried again in 2011[15], but divorced at a later, unknown date. Most recently, kuz married his 3rd wife, 21 year old Nedelya Kuznetsova[16], on August 20th, 2021. She has on occasion made public appearances on Gab[17], though her instagram account, which she previously advertised on her gab account has since been deleted for unkown reasons.

Outside the internet, little is known about kuz's day to day life, he served in the Russian Military[18] (see pictures below) and made several minor TV appearances in Omsk in the early 2000s, according to Bibliotheca Anonoma, which details kuz's life extensively. A large expose paper detailing kuz's "monopolization" of imageboards is also available, which provided many (unsourced) details about kuz.

Despite many criticisms of "decadent" western culture, kuz is a huge fan of Elvis Presley, judging by his Vidlii channel and avatars on other websites.

Kuz wrote in 2021 "11 tips for good health", which suggested things such as abandoning fast food, wireless devices, all pills, videogames, and pornography (limit to once per month), kuz claims his various lifestyle changes have lead him to have exceptionally healthy skin.[19] He also (controversially) wrote about his distaste for the FOSS community and why he kept his software proprietary.[20]

Cvnka is a Russian-American vtuber[21] who's gimmick is lovecraftian/eldritch horror. Kuz is/was apparently a fan of her and rumors of supposed interactions between the two are circulated but suppressed quickly on 9ch and other sites.

Several posts made their way to the western internet, which were rehashed by kuz's detractors, including faganon, who extensively documented their supposed interactions, suggesting they first met in 2015, which kuz claims is impossible.[22] Regardless of the validity, they have apparently interacted, as several screenshots of supposed conversations between them exist and occasionally make their rounds on websites where kuz's sexual interactions are commonly discussed (such as 9ch, soyjak.party). A megathread was held on 3chan about the topic but no conclusion was reached.

Its believed by some that Cvnka may be the unnamed "Polish Woman" whom kuz contracted HIV/AIDs from.

Kuz is a important figure on the site, even after his resignation, as the vast majority of Heyuri's lifespan took place under his rule. As of yet, he has been the longest reigning admin, ruling for just over 2 years. Under his initial ownership Heyuris activity went up by 600%, peaking in July[23]. He asserts this is mostly because of him inviting tripfags from 9chan[24], although a wide variety of factors are likely contributing to this. During his ownership, Heyuri experienced its "golden age", a timespan which usually is thought to have lasted from May to August 2020. Shortly after this, due to a schism between him and lolico, Heyuri entered the dark ages.

Kuz left Heyuri in 2022, and later wrote a blogpost titles "Reflections on Heyuri", where he reflected on Heyuri and his decision to leave. He expressed that he felt the users had grown away from him, which was partially the reason he left.[26]

"the real reason is more complex than I wrote on the newspost and on /q/. While yes, I did have less time, I also felt the userbase had lost a significant connection with me and my antics on other websites had caused some upset. I put alot into Heyuri, aside from countless hours working on development of the sites software, I also posted there heavily, being in the top 10 contributors, at least for a while. I oversaw personally the creation of almost everything on Heyuri, good and bad, even when lolico was still sharing the helm with me. Even today, I was 100% behind the creation of the newly relaunched Heyuri Historical Society, and my maintenance work generally goes unnoticed. While this applies to all the websites, it was especially true for Heyuri, and my lack of public appearances, which was mainly due to the fact I had nothing to say in public seemed to start a mindset among the users that I had grown disconnected or disinterested from the site."[27]

Since his departure, kuz has regularly clashed with users on various topics.[28] Kuz is still a touchy subject and mention of his name can occasionally spark huge debates due to his controversial behavior.[29] 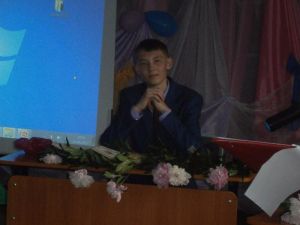 A picture of kuz at an event - S. Bibanon

9ch was a Russian textboard kuz used to own. Very little is known about it in the english world, see 9chan for more info.

In kuz's typical, whimsical fashion, someone first suggested kuz buy Vidlii on Ayashii World, to which kuz replied "Thanks for the idea"[31], and literally hours later it was announced he had purchased the site, to the surprise of many users. The sudden purchase shocked and excited many, and plans were discussed.[32] Kuz stated he would utilize this for Heyuris benefit, although no Heyuri ads appeared until months later. Apparently this was because kuz wanted to quietely introduce a user banner system, then add Heyuri banners, however kaguya said "fuck that" and just put up a Heyuri video on the front page, which drew many new users to the site.

Kuz initially recieved alot of controversy after users discovered his anti-LGBT writings, but it was quickly suppressed, more controversy followed when a Kolyma-affiliated channel started uploading Russian Propaganda to the site, causing some users to leave "in support of ukraine", although for the most part no one cared, and no action was taken.

Kuz shares adminship of the website with lolwut, although it was suggested that kuz later just became the sysadmin.

Kissu is a imageboard which is owned by one of kuz's many "public enemies", kuz's rivalry with its two owners were a source of embarrassment and downtime for Heyuri for many months until kuz's abdication.

Kissu and Heyuri regularly attacked eachother, with kuz alleging one of its owners, Oregonian Programmer "Robert Brown" was a pedophile and spammed "terabytes" of CP on his sites, while Brown said kuz was a "unstable psycho" who kidnapped and manipulated teenagers and forced them into coding bootcamps, and also that he had forced employees of his company to download spyware. None of the claims made by either are supported by concrete evidence, however both maintain their rivalry today.

The other owner of the site, 30 year old Kai Niccol-Griffith, is a /jp/ lolcow who kuz accuses of slandering him and maliciously ddos'ing his websites, while Kai claims kuz tried to use kissu to advertise his websites, Kai called kuz a "self obsessed creep" and kuz retorted saying Kai was "autistic" and suggested he had gynocomastia, as well as HIV/AIDs, which kuz himself is known to have.

Soyjak.party, more commonly known simply as the 'party or the 'sharty is an imageboard based around soyjaks. Kuz has an incredibly extensive history with the website including an attempt to purchase it in January 2022 that ultimately failed and many fights with its owner - "Soot". The topic is a hugely contentious issue and the resulting scandal contributed to kuz resigning later that year.

Gurochan is kuz's largest website, although it is currently owned by Kaguya, kuz revived it in early 2021.

Kuz first brought it back with co-admin "Straitjakit", whom now ranks among kuz's list of "defeated enemies". Straitjakit and Kuz ruled together for about 10 seconds (January 29th - February 13th) before kuz's abrasive personality and straitjakits down syndrome collided and kuz kicked him out, resulting in huge drama. Despite initial flak, the userbase gradually began to take kuz's side. Now pretty much everyone sides with kuz, as straitjakit is despised by most of the community.[33]

Kuz gave the website to Kaguya in June of 2021, although he still owns the domain and manages the backend.

Kuz maintains a Gab account,[34] as does his wife[35] and several other kolyma users, such as Kaguya[36] and Yuka.[37] Many kolyma users made kolyma accounts after kuz sent out a global message telling everyone to create an account.

This section is pulled from Bibliotheca Anonoma

Robert Brown, also known as Tokiko, is an American web developer and antifa supporter. He's the creator of the Multichan project, a decentralized, federated and anonymous textboard, a project which kuz was involved in. A summary of kuz's involvement is as follows

A timeline of kuz's owned websites, not including the dozens of vacant, kuz-owned parked domains (e.g. ru2ch.net). This list contains sites which were previously owned by kuz as well.