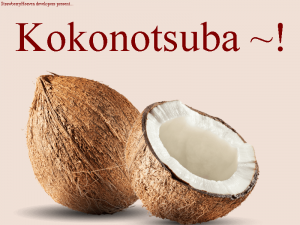 Kokonotsuba is an open-source imageboard software originally developed by kuz for use on his websites[1], but as of at least January 2023 is only used by Heyuri. Originally a fork of pixmicat, the software has since been modified so heavily that in 2021, kuz declared that it was its own independent software. It was originally released on March 14th, 2021 (9channel's 16th birthday), and was made open source on January 6th, 2023.[2]

Kokonotsuba is known for being slow, although it is mostly bugless with a few exceptions. It notably has several unique features, such as trip-mail, a dating feature, built-in polls, and more. However, many of these features are not currently enabled on Heyuri.

Origin of the name

The name Kokonotsuba was originally suggested by an anonymous StrawberryHeaven user on November 7th, 2020, in a thread titled "New Software Name Suggestions Thread".[3]

If you want to stick with "number of leaves on a plant" naming convention (e.g. Futaba (2 leaves), Yotsuba (4 leaves)), Kokonotsuba would be the "9 leaves" variation

The name "Kokonotsuba" was chosen after the long-lasting tradition of naming imageboard software after the number of leaves on a plant (e.g. Futaba). "9 leaves" was chosen because of 9channel, the genesis of KolymaNET.[1]

Why it was originally closed source

Before becoming open source, kuz had previously defended his choice of keeping the software closed source by saying:

You think just because somethings open source means people will contribute? [...] Kokonotsuba may not be the fastest but its definitely special, it has alot of cool features which make the boards that use it unique. The fact only a select few sites can use it contributes to those sites value in a special way. [...] If it was open source, it'd lose so much charm. Its ours. We can build it for ourselves.