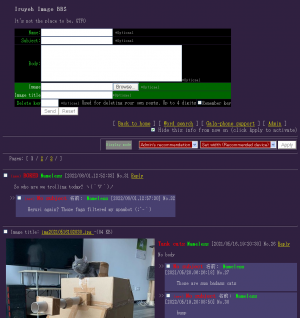 An unconfirmed screenshot of what appears to be an Iruyeh-branded imageboard.

Iruyeh is not the place to be. Not much is known about the site due to its elusive nature, but the general consensus among internet researchers is that Iruyeh is an underground online community with a website (or possibly many websites) that runs exclusively on Perl scripts (protecting itself from attacks by would-be script kiddies). It is believed to have been founded sometime in 2018 by an elderly man who went by the online handle Ocilol. However, online rumors suggest that he has since stepped down, and Iruyeh is now operated by a member of the AmylokNET network.

It is unknown if there is any definitive connection between Iruyeh and Heyuri, but some people have suspected that Iruyeh members may be behind many previous DDoS and crapflooding attacks against Heyuri. Kaguya—Heyuri's current administrator—once hid an easter egg near what is rumored to be a gateway to Iruyeh.